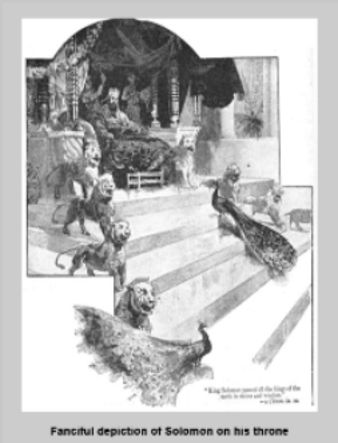 Thrones were found throughout the canon of ancient furniture. The depiction of monarchs and deities as seated on chairs is a common topos in the iconography of the Ancient Near East.

The word throne itself is from Greek θρόνος (thronos), “seat, chair”, in origin a derivation from the PIE root *dher- “to support” (also in dharma “post, sacrificial pole”). Early Greek Διὸς θρόνους (Dios thronous) was a term for the “support of the heavens”, i.e. the axis mundi, which term when Zeus became an anthropomorphic god was imagined as the “seat of Zeus”. In Ancient Greek, a “thronos” was a specific but ordinary type of chair with a footstool, a high status object but not necessarily with any connotations of power. The Achaeans (according to Homer) were known to place additional, empty thrones in the royal palaces and temples so that the gods could be seated when they wished to be. The most famous of these thrones was the throne of Apollo in Amyclae.

The Romans also had two types of thrones- one for the Emperor and one for the goddess Roma whose statues were seated upon thrones, which became centers of worship.