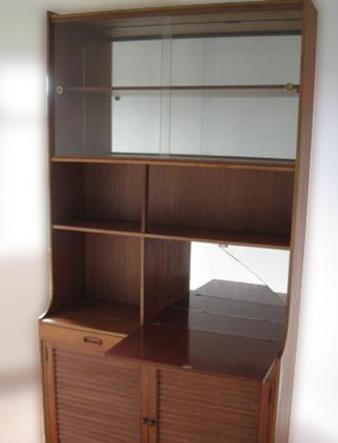 A hutch is an American English word for a type of furniture.

The term is now usually used to describe a set of shelves or cabinets placed on top of a lower unit with a counter and either drawers or cabinets. Hutches are often seen in the form of desks, dining room, or kitchen furniture. It is frequently referred to by furniture aficionados as a hutch dresser.

In the 18th and early 19th century, however, the term hutch or hutch table referred to a tabletop set onto a base in such a way that when the table was not in use, the top pivoted to a vertical position and became the back of a chair or wider settee. This was a very useful form at a time when many homes had a large room used for multiple functions, because it allowed a large dining table to swing up and out of the way.

Many hutches from recent decades feature a mirror in the back of the upper shelving to give the additional appearance of depth and to better display the fineries kept within (in a similar manner to a china cabinet).

Amongst the most desirable of the 1960s veneered kind are those featuring a fold down liquor compartment where the fold down compartment door serves to increase the worktop area for setting out the glassware and preparing a drink. These liquor compartments often feature a mirror at the back and frequently the inner wood veneer surface of the door (becoming the worktop surface) is polished to a high luster, increasing the overall effect thus impressing guests and onlookers.